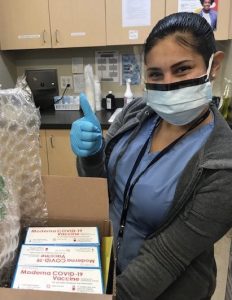 Community Health Centers are doubling their pace in vaccinating minority and ethnic populations against COVID according to recent data released by the Kaiser Family Foundation (KFF). People of color made up the majority of people who received vaccinations at health centers, including 59 percent of people receiving the first dose and 54 percent of people receiving the second/final dose of the vaccine.  These data suggest that people of color represent greater shares of vaccinations at health centers compared to their shares nationally, based on data reported by the CDC. These findings also signify the success of the partnership between the Biden Administration and health centers to advance equitable access to COVID-19 vaccinations. This partnership involves the allocation of vaccines directly to health centers starting in January 2021 and critical funding support through the recently enacted American Rescue Plan.

Health centers are reaching people of color at a higher rate than overall vaccination efforts, according to KKF. Indeed, the brief notes that the “share of first doses administered to people of color at health centers has grown from 34 percent to 64 percent as of April 2.”  The KFF data tracks with data from the field collected by the National Association of Community Health Centers (NACHC) through the recently released report: Health Centers on the Front Lines of COVID-19: One-Year Review.

“There is a lot of determination and urgency in the race to get as many people as possible vaccinated and stop the spread of the virus across the health center community,” said Ron Yee, Chief Medical Officer. “The success is happening at the local level, where health centers are lowering risk perceptions about the vaccines through their role as trusted messengers and also forming key partnerships with churches, civic organizations, community groups and schools, etc.  They are also launching mobile vans and pop-up clinics, meeting people where they are.  Vaccinations are a job health centers have traditionally carried out and underscore how they are ideally suited to meet this historic effort to stop a global pandemic and ensure equity in hard-hit communities.”

Health centers care for 30 million people nationwide; 63 percent of their patient population are members of a racial or ethnic minority, a population which has suffered higher infection and mortality rates from COVID.   Since they began fighting on the frontlines of COVID more than one year ago, health centers have initiated more than 4 million vaccines and tested more than 10 million patients for COVID. More than half of patients who have been tested (61 percent) are racial/ethnic minorities and 1.3 million have tested positive for the virus.