NACHC Statement on the Passing of U.S. Rep. John Lewis 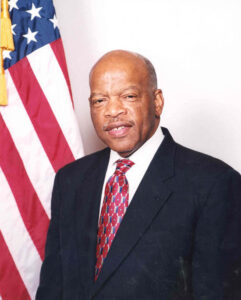 The Community Health Center Movement mourns the passing of Congressman John Lewis – one of America’s greatest Civil Rights leaders and a dear friend and strong supporter of the Health Center Program. Congressman Lewis clearly understood and spoke out passionately on the importance of Community Health Centers in bringing vital health services to people living in underserved communities regardless of their insurance status or ability to pay. He further supported health workforce programs to recruit and train people, with an emphasis on minorities, to serve in these areas.

Congressman Lewis knew our health centers personally and visited many of those located in Georgia throughout his years in Congress.   He was also the recipient of the National Association of Community Health Centers’ (NACHC) National Leadership Award and served as an Honorary Committee Member of the 50th Anniversary of the Health Center Program.

Whether marching in the streets or speaking on the House Floor, Congressman Lewis’ voice was always at the forefront on behalf of the moral causes he believed in and people for whom justice was denied.  As a very young man in 1965, he put his life on the line for voting rights for Black Americans and led hundreds of protesters across the Edmund Pettus Bridge in Alabama.  Just recently and facing his own personal fight with cancer, Lewis marched alongside a new generation of activists protesting the unjust killing of George Floyd and other African Americans as a part of the Black Lives Matter movement.

In his 2013 speech commemorating the 50th Anniversary of the Civil Rights March on Washington,  Congressman Lewis said “I’m not tired. I’m not weary. I’m not prepared to sit down and give up. I am ready to fight and continue to fight.” He urged all people to do the same.  As for all of us in the Health Center Movement, we will honor his legacy by doing just that.