NACHC STATEMENT Regarding the Passing of Sidney Poitier 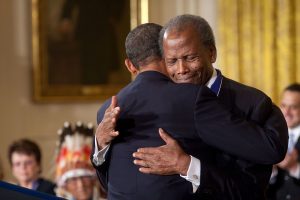 We at NACHC mourn the passing of Sidney Poitier, who inspired a nation with his dignity, grace and exceptional talent.  He was more than a Hollywood screen and stage legend; indeed, he taught by example, his wisdom and words showing that racial and ethnic barriers have no place in a civilized society.  Born the 7th child of tomato farmers in The Bahamas, Poitier was the first African American actor to break longstanding color barriers on the Hollywood screen and win an Academy Award.  For ordinary men, this would have been enough. Instead, Mr. Poitier used his international acclaim to open doors for countless others and successive generations.

He not only advocated for social change, he also put his life on the line for it, walking shoulder to shoulder with Civil Rights leaders during Dr. Martin Luther King Jr.’s March on Washington and in Mississippi during Freedom Summer. A recipient of the Presidential Medal of Freedom, our nation’s highest civil honor, Mr. Poitier’s legacy and commitment to racial justice and humanitarianism will never be forgotten.